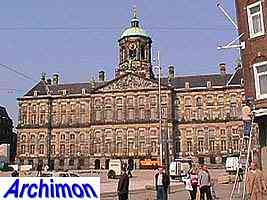 In the 17th century the power of the Republic reached its peak. Even though the war with Spain did not officially end until 1648, especially during a twelve-year truce (1609-1621) the economy saw a spectacular growth, thanks to the slave trade, the manufacturering of arms and the monopoly on goods from certain areas in east Asia. Especially the provinces of Holland and Zeeland profitted. It was in this climate that Jacob van Campen, originally a painter, introduced the latest architectural trends from Italy, which he had visited between 1617 and 1621. This new style was characterized by an emphasis on symmetry and proportion. The basic shape of a building was usually simple, with ornamentation getting much more attention. Facades are divided by pilasters, and the central, usually protruding, part of the front is crowned by a tympanum. Van Campen is best known for his town hall in Amsterdam (left), the construction of which lasted from 1648 until 1665. Besides official buildings like this, the classical style also had a great impact on the design of many of the first protestant churches, a subject dealt with on a seperate page, and that of many houses.

Other important architects working in this style were Pieter Post, Van Campen's former assistent, who becomes court-architect of the stadtholders. Philips Vingboons is often considered the most original and talented architect of this period, being more inventive, where the others often did not do much more than copy the examples from the then very popular books about ancient Greek and Roman architecture. Because Vingboons is a catholic he only manages to get a few important assignments. Another important architect of this period is Arend van 's-Gravensande. 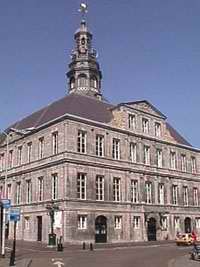 In provinces with a catholic majority, which were under military occupation from Republican troops, classicism presented itself as a symbol of the power of the occupant. The townhall in Maastricht was designed by Pieter Post. 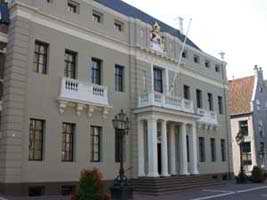 After 1670 a new variant of Classicism emerges. This late-Classical style is characterized by walls that are undivided by pilasters. Ornamentation is reduced to the centre and the entrance of a building. The facade of the town hall in Deventer from 1693-1694 is a typical example. It was designed by Jacob Roman.