Neo-Gothicism in The Netherlands when it emerged around 1830 was directly influenced by the Gothic Revival in Great-Britain. Crownprince Willem, the later king Willem II, had during his study in that country become interested in Gothic architecture, and after his return to The Netherlands encouraged architects to build in a similar style. This style derived much from medieval Gothicism without really understanding its constructional principles and logic. Gothic decorative influences were liberally mixed with other styles, making this style perhaps a much more varied one than its later namesake. Unlike the later Neo-Gothicism the early style was not predominantly used for churches, which were still mostly build in a Neo-Classical style at that time, but for houses, townhalls, railway stations and even factories as well. Churches in this style are dealt with on a seperate page.

A classic example of the king's own style in Den Haag is this building that was obviously inspired by English churches. It wasn't intended to be a church though, although that was a function it later did fullfill, but was built in 1845 as the first royal stables instead. Most of the building was demolished in 1971, and this remaing facade now hides a modern office-building. The tower sports some octagonal buttresses, a typically English phenomenon that for a short time was very popular in The Netherlands as well. 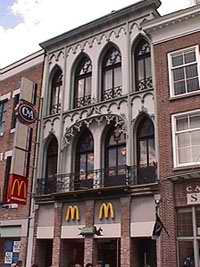 A shop in 's-Hertogenbosch, the facade of which unfortunately has been mutilated. Unlike the example above, where some constructional Gothic features were used, here the decorative aspects of Gothicism have been copied for something new.

Back to Architectural styles